Ah, my first sprint. So many thoughts running through my head leading up to this. Would I finish? Would I drown? Would I come from nowhere and win the whole damn thing? Did I remember to bring everything I need? Am I just embarrassing myself?

First, some background on the event. Memphis in May is an annual festival filled with food, music and culture. Each year, a different host country is selected. For 2014, the host country was Panama. During BBQ Fest, or the World Championship Barbecue Cooking Competition, team booths were designed with an ode to Panama; the winning team created a booth that resembled a bus that if you’ve ever been to Central America, you know what it looks like. As part of the month-long celebration, a triathlon takes place. Friday night is the 10k, Saturday morning is the sprint, and Sunday is the Olympic distance. Back in the day, the Olympic distance was a Kona qualifier.

Normally, Memphis in May is hot. There is very little shade along the course (and by little, I mean a small underpass…that’s it), the temps are usually in the 80s or 90s, and if the wind stays down the course can be very fast. Because it’s in the Mississippi Delta, it is flat as a pancake. The only “hills” are entrances to the casinos. Everyone told me that if you can keep yourself hydrated, you will fly on this course. Even better, the swim is in a very shallow, spring-fed pond. You can practically walk the entire thing if you so choose. The swim start is also beginner-friendly, with a time trial start by age group. Guy in front of you goes down the ramp, they count to three, then wave you through. No mass start to worry about, no getting kicked or punched in the face.

But my race? I would not be so lucky. The Weather Gods did not see fit to grant us good weather. Instead it was cold and pouring rain. It was in the 50s Saturday morning and had been raining since Friday afternoon. The water was disgusting, though warmer than the air so it felt sort of good. The transition area was a massive mud pit. This should be fun, I thought, shivering. 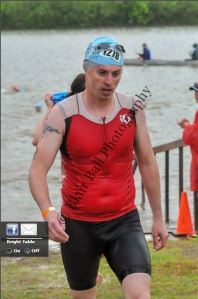 My wave was one of the first to go. I did manage to get in the water and swim/float around a bit. The water felt better than being in the rain, and my swimming felt ok. Once the race actually began, though, it was totally different. I made it maybe 50 yards before I started to panic. I couldn’t breathe so I reached my toes to the bottom and started shuffling along. I was not the only one, but it still made me feel pretty bad. As you swim, you go through a very narrow channel, which then opens up into the bottom portion of the hour-glass pond. Here’s where I really got in trouble. With all the rain, the depths reached too far from where I could stand. I swam the last 200 yards on my back at a very, very slow pace. It was miserable. I have never felt so happy to get out of the water in my life. 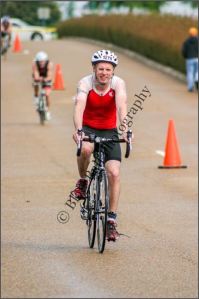 I walked to the transition area trying to get my bearings, feeling like I had been in the water for over an hour (note: it was 15 minutes). I found my bike, put on my helmet, socks and shoes, picked up my bike and carried it to the mount line. I should have carried my socks and shoes and put them on when I got to pavement, as many people did. I did a slow mount and started riding. Honestly, the thing that scared me most of the triathlon was the bike. I was nervous I would crash in embarrassing fashion. No crashes, thankfully! I was plugging along at an excellent pace for the first half, but then I hit a wall. I slowed down to a veritable crawl and got passed by nearly the entire field. Seriously, I finished the bike 41st out of 42 in my age group. Horrible. Granted, I’ve done the least amount of work on the bike. Definitely need to improve there. Best part of the bike was getting to the dismount area, I actually had a smile on my face!

Finally it was time to run. Here’s where I felt I could make up some ground, and I certainly did. From 41st in my AG after the bike to 36th. Not a huge improvement, but I felt strong the whole time. The course starts straight up a little hill, then down a dirt path, before hitting a service road that winds back to the main casino, past the swim start and ultimately to the finish. At one point I’m running alongside a lady and this 15 year old girl comes screaming up on us. We both looked at each other and just laughed. I pushed as hard as I could at the end, but had to take it easy in the chute because it was so muddy I didn’t want to slip. But I crossed the finish line and officially became a triathlete!

For my first sprint, I definitely learned a lot. Namely, work harder on the bike and get some open water swimming in before the race! But I had an absolute blast, despite the weather and tough conditions. I had a smile on my face for most of the day and loved telling all my friends about the race. R even got my finish on video! I’ll definitely do more, though my triathlon season is over for the year. With both of us getting into the NYC Marathon, I won’t have enough time to dedicate to training for another. Plus the remaining races in the area just aren’t feasible for me. Next year I’ll definitely be back, hopefully for the Olympic. I’ve got a year to train and get better at swimming and cycling.

4 thoughts on “Race Report: Memphis in May Sprint Triathlon”