I swam a decent amount (for me) in 2014 as I was preparing for my first triathlon. A total of 36 swims, actually. My longest swim session was 1700 yards, but the longest actual swim was probably 600 yards. After that year, I swam…..once. One single time, in 2015, for about 900 total yards. After that single time in ’15, I didn’t swim again until a few weeks ago. Yikes!

Since I started back up again, I’ve been following the stupid simple plan from this site. It helps you build up to a mile. Last time I swam more than once, I made it up to week four, where you go 600 yards in a straight shot before some intervals. This time, I wasn’t really following the plan in a strict sense, but I was generally following portions of it. I’d swim the workout, then swim 450 yards in a straight shot. I was feeling pretty good about things!

Monday morning, I went to the pool and decided that rather than following the plan, I was just going to swim and see how far I could go. I figured I’d go 800, maybe 900 yards. A straight thousand would be awesome. When it was all said and done, I hit 1650 yards. A full swimmer’s mile! Just over an Olympic distance swim, a bit short of a half ironman.

Sure, it wasn’t fast at all. My total time was 39:XX, which is pretty dang slow for a pool swim. But that’s fine; speed will come. It’s the fact that I could go for about 40 minutes and cover that distance. That gives me some confidence in a sprint tri, where I’ll be swimming a much, much shorter distance (the one I’m targeting in June is a quarter mile, or about 440 yards). I’ll need to work on open water swimming, but being able to go 3x farther than necessary has to help.

Another decent base week. The weather has been surprisingly awesome around here. Usually by this time of the year, it’s an inferno outside. The humidity comes later, but it’s typically in the 80s every day, and only getting to the low 60s at night. This year, it’s been much more pleasant, which has been great for running!

I also managed to get in two bikes during the week. The first was a 3 min x 3 session, and the other was 20 second sprints with two minutes of recovery. My butt still hurts a ton once I get to about 30-40 minutes though, which I need to fix. No way could I do an Olympic of 70.3/140.6 if my body hates me after 30 minutes. Not sure if it’s my saddle, my cycling shorts (they’re Pearl Izumi, so not some off-brand stuff!) or just my fit. I know my fit is pretty bad and I need to get it checked/reset…

We moved the long-ish run to Sunday, since we knew Saturday would be a recovery day from BBQ Fest. For those that don’t know, for one glorious week in May, Tome Lee Park in downtown Memphis turns into the mecca for BBQ: Memphis In May World Championship BBQ Cooking Competition (phew, that’s a mouthful). Here, everyone just calls it BBQ Fest. Basically, teams compete in three main categories (Ribs, Shoulder, Whole Hog) and a host of ancillaries (i.e. sauce, seafood, anything-but, etc.) to see who is the best pitmaster. Each team has a tent that serves as home base, where they cook, eat, relax, and party. Some teams take it more seriously than others….you could have one tent that has lots of trophies and is empty at night except for the guys watching the smoker, while the tent next door has a massive party going on. Our tent straddles the two, with a pretty good party scene but also some great food! Check out our tent (the honored country this year was Colombia…and you’d be amazed how many teams misspelled that!) and some of the shoulders while they were prepped/smoked: 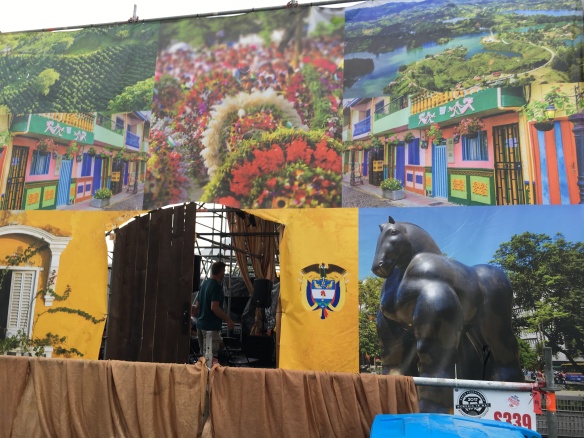 As you can see by the picture of the tent, these aren’t some little Coleman tents. Our is two stories tall, has full plumbing and electric, a DJ booth, a bar, a solid floor (we build ours up a few feet in the air so we get an awesome river view), and of course the kitchen in the back. After dinner, the music starts and the tables are moved away and everyone dances until it’s time to go!

It was a great year, and we came in third for best booth! Since I joined the team in 2012, we’ve been in the top three for all but one year. It’s a ton of fun, great food, and the people watching is fantastic. I highly recommend a visit.

Sorry for the delay in posting this, things have been a bit hectic (as they always are in May).

It was a fairly straightfoward week, four runs (including a race), a swim and a bike. The bike was meant to be easy and short, and I shortened it even more after leaving the house without my (full of delicious ice water) bottle. Left the damn thing right next to where my bike was. Fail.

Saturday, of course, was the Bluff City 10k, where I came up just 44 seconds short of hitting sub-50 at the 10k distance. I hadn’t really been training to do it, and I ran hard at Louisville only two weeks before, so I can’t complain. But I definitely could have gone faster if I had more energy. We had great weather for it too, so it’s a shame I wasn’t fully ready to go. Oh well.

Other than that, a pretty quiet week. I had a cold or allergies for the first half (still have a runny nose!), but doing much better now. Of course, now Ro is dealing with whatever I had! Poor girl.

This was the third year I’ve signed up for this race, and the second time I’ve actually ran it (last year…I uh….had too much fun the night before). It’s always right around Ro’s birthday, and it’s super convenient to our house. The course is essentially a massive loop that runs alongside our typical routes anyway, so we’re used to running on the terrain. Having just done the Kentucky Derby Festival miniMarathon and hitting a massive PR only two weeks ago, we didn’t have high hopes for this, though PRs were dancing in our heads.

Friday I picked up our packets, and then we headed to dinner for her birthday. Now, we usually have pasta before a race. But given it was her birthday, she wanted something fancier. So off to the Capital Grille we went. We munched on delicious seafood, crazy good steaks, a decadent dessert, a bottle of wine and some cocktails before. Absolutely delicious, but not the right meal before a race!

Saturday morning, we woke up feeling very heavy and not at all interested in eating any more food. We did the best we could and ran the mile or so to the race start. 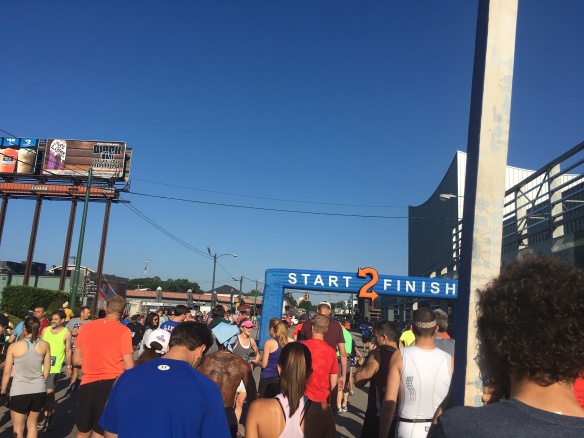 We started a bit closer to the front than we had hoped, and right at 8AM we were off. My goal was to keep things as close to an 8 minute mile as possible, to hopefully hit a sub-50 finish time. Things were right on track for the first four miles, but then the course turned uphill for nearly an entire mile, and I started slowing down a bit. I was still keeping things close though; mile 6 was 8:11. I crossed the finish line in 50:43, so damn close!

Afterwards, I waited for Ro to finish (1:00:34! So close!), then we started walking back to the house. We stopped along the way to cheer on some other runners (did I mention the course literally runs in front of our house?) and a very dear friend.

All in all, a great race all things considered. I’m not gonna complain too much about a nearly two-minute PR, and coming just two weeks after a PR in the half; two PRs in three weeks! Not too bad!

That’s it for scheduled races until October (things tend to slow down after May here in the mid-south, given how damn hot it gets) and the MCM. Formal training for that begins in late June, though I’ll be keeping up my base workouts for the time being.

The week post-Louisville (race report here) was pretty easy. We decided to take it nice and easy as we tried to revel in our new PRs and accomplishing a goal I set out to achieve nearly six years ago. Just a few easy weekday runs and 8 miles on Saturday. It’s getting hot already!

Friday morning I actually went to the pool and got in a swim. Now, this is the first time I’ve swam since June of 2015! And that was a single time; previously it was summer of 2014 shortly after my only triathlon. So yeah….second time swimming in three years. And shockingly, I didn’t drown. It was a decent swim all things considered: 4×100, 4×50, 4×25 and then a 450 yard straight swim.

Saturday after our run, it was time to hit up Memphis in May’s Music Fest, a three-day concert held at Tom Lee Park. We only had tickets for Saturday, since all I really wanted to see was Silversun Pickups. It was an absolutely GORGEOUS night out for it: 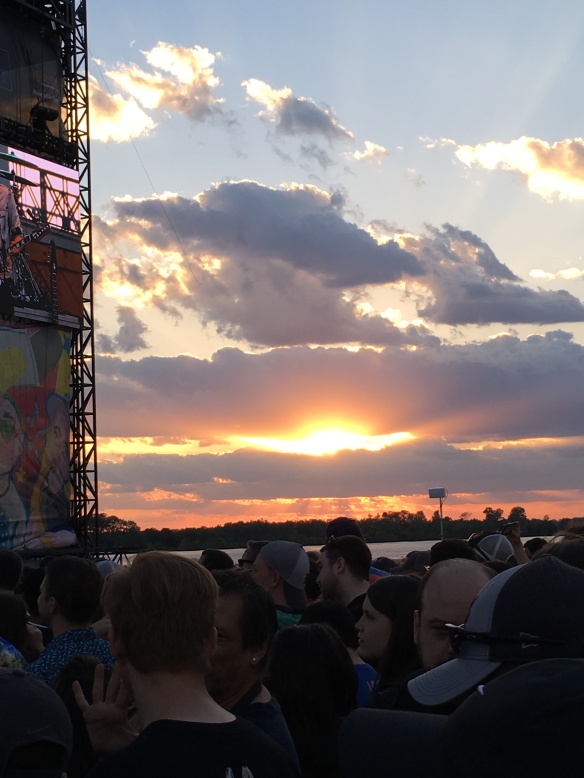 Sunday I got in a bit of a ride. Actually, it was the longest I’ve ever ridden outside (apparently my records don’t last long), just shy of 18 miles.

I head straight towards the river to see how high it’s gotten (we are a bit over flood stage at the moment): 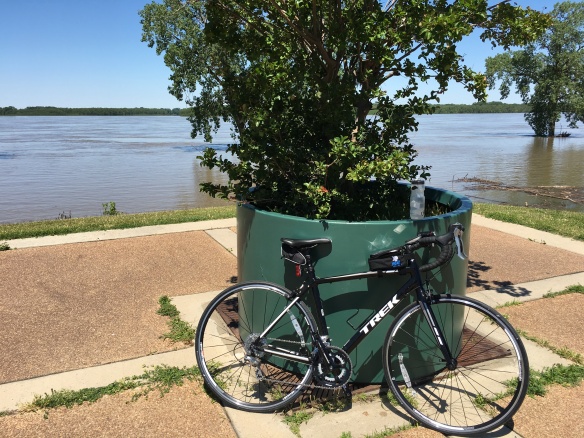 Afterwards, it was time for some brunch at the pub 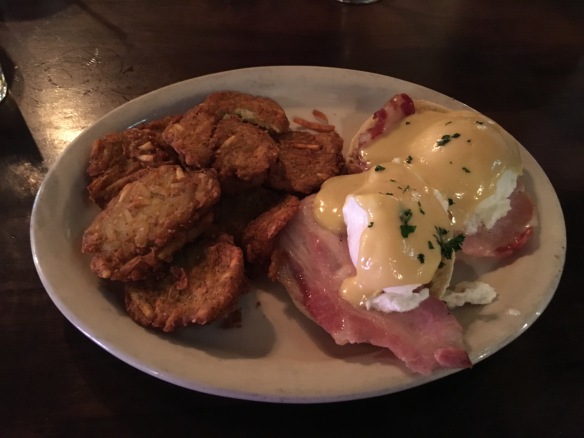 And with that, another week in the books!

There was an error retrieving images from Instagram. An attempt will be remade in a few minutes.