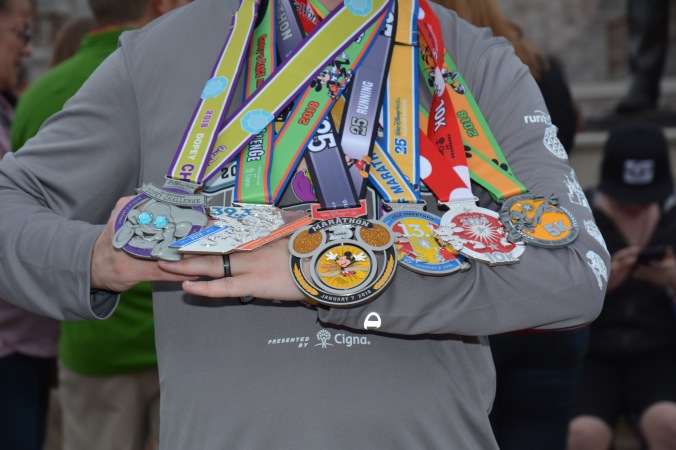 First off, the good news: We successfully finished the Dopey Challenge! 48.6 miles of racing across four (very early) mornings. A 5k, a 10k, a half marathon, and a full marathon. I’m still amazed we even signed up for this thing, let alone finished it with flying colors. I’ll say at the outset that it was very cold, the morning wake-up calls were horrible, the marathon was very challenging emotionally and physically, and I couldn’t be happier that we got to run it together. It truly was a magical weekend.

Wednesday: Packet Pickup and Expo
Before the running began, we had some business to attend to. First up was picking up our packets. Obviously since we were running Thursday – Sunday, all Dopey participants had to pick up their bibs on Wednesday. This led to a VERY crowded expo with very, very long lines. Bibs and shirts were on the upstairs level of the HP Center at the ESPN Wide World of Sports venue.

The line to pick up bibs

For Dopey, you get two bibs: one for the 5k/10k and one for the half/full (they have the same number, though). They take your photo so that they can prove you ran with those bibs later on. After that, you pick up your (SIX!) shirts.

Downstairs you can visit the runDisney store and pick up any pre-purchased stuff. We did a bit of shopping, avoiding the super long line to get into the merchandise area by simply ducking under the ropes separating the pre-purchased portion from the rest of the store. We headed back to the hotel to relax and prepare for the next day.

It was friggin’ cold! The temperature was right at freezing, with a slight wind chill dropping it into the high 20s. We drove over from our resort so that we could sit in the car for as long as possible. When it was time, we opted not to even bother checking a bag, as we planned to keep our drop clothes on for the entire race.

The 5k has a pretty simple course: start in one of the EPCOT parking lots, run through a bit of the backstage area, pop out onto the World Showcase in between Mexico and Norway, and run around to the other side, underneath Spaceship Earth, and finishing back in the parking lot. We opted to skip the first few photo stops, as the lines were a bit long and we were too cold to stop. It was all about forward motion, get back to the car as quickly as possible. We did stop for one character though. Soon enough, we were done.

Done with the first race

After the race, I actually had to get to work, so I showered and drove to the office for a bit. When I came back, we simply relaxed at our resort, ate a quick dinner, and tried to get to bed early. It didn’t work, but hey, we tried! 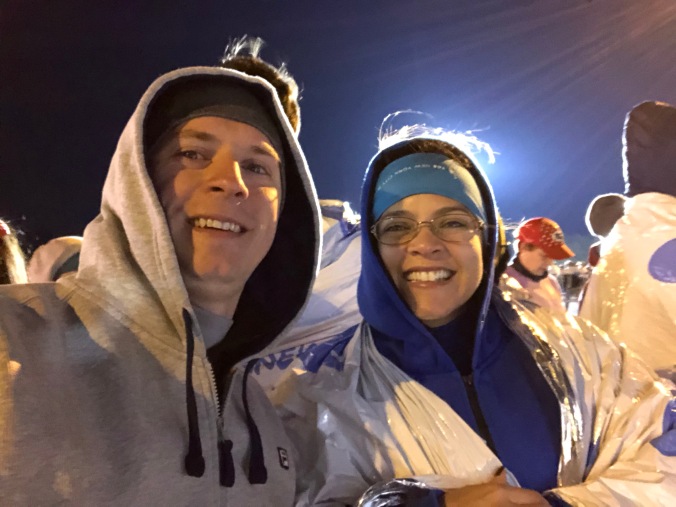 Friday morning brought essentially the same temperature and wind chill as Thursday. It maybe felt just a tad warmer, but that could have been our tired minds playing tricks on us. We kept to the same plan: I kept my throw clothes on the entire time, we stayed in the car as long as possible, and tried not to stop very often. Of course, I couldn’t NOT stop to say hi to Vacation Genie:

Or to get a photo with Spaceship Earth:

The course for the 10k was pretty similar to the 5k, just with a longer run around parking lots and other streets before the backstage area. We also ran into and around the boardwalk before going back into EPCOT. After we finished, we got our second medals of the challenge and decided to take a few photos with some of the finish line characters (AKA the Big Ones: they had Mickey, Minnie, Donald, Pluto, Goofy and Dopey out each morning and immediately post-race) before heading back to the room. 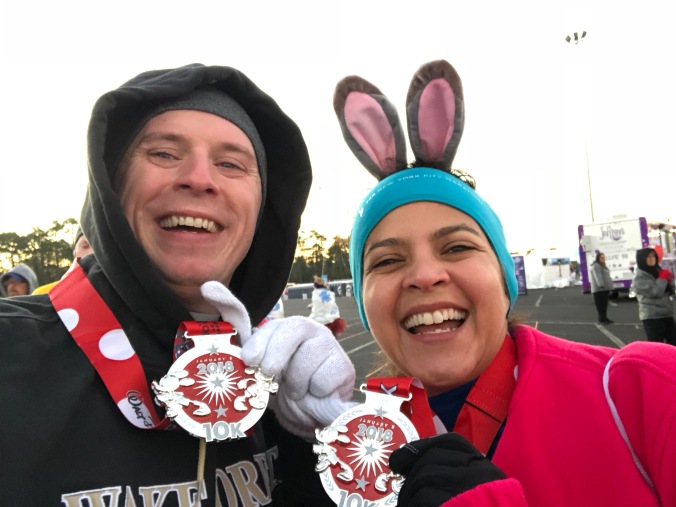 And just like that, we were halfway done. Well, halfway in terms of days. In reality we had only ran 9.3 miles, and still had 39.3 to go. The rest of Friday was spent walking around our resort to keep our legs fresh, along with dinner at Mama Melrose at Hollywood Studios. Another early bedtime (in theory) to rest up for the remaining two races.